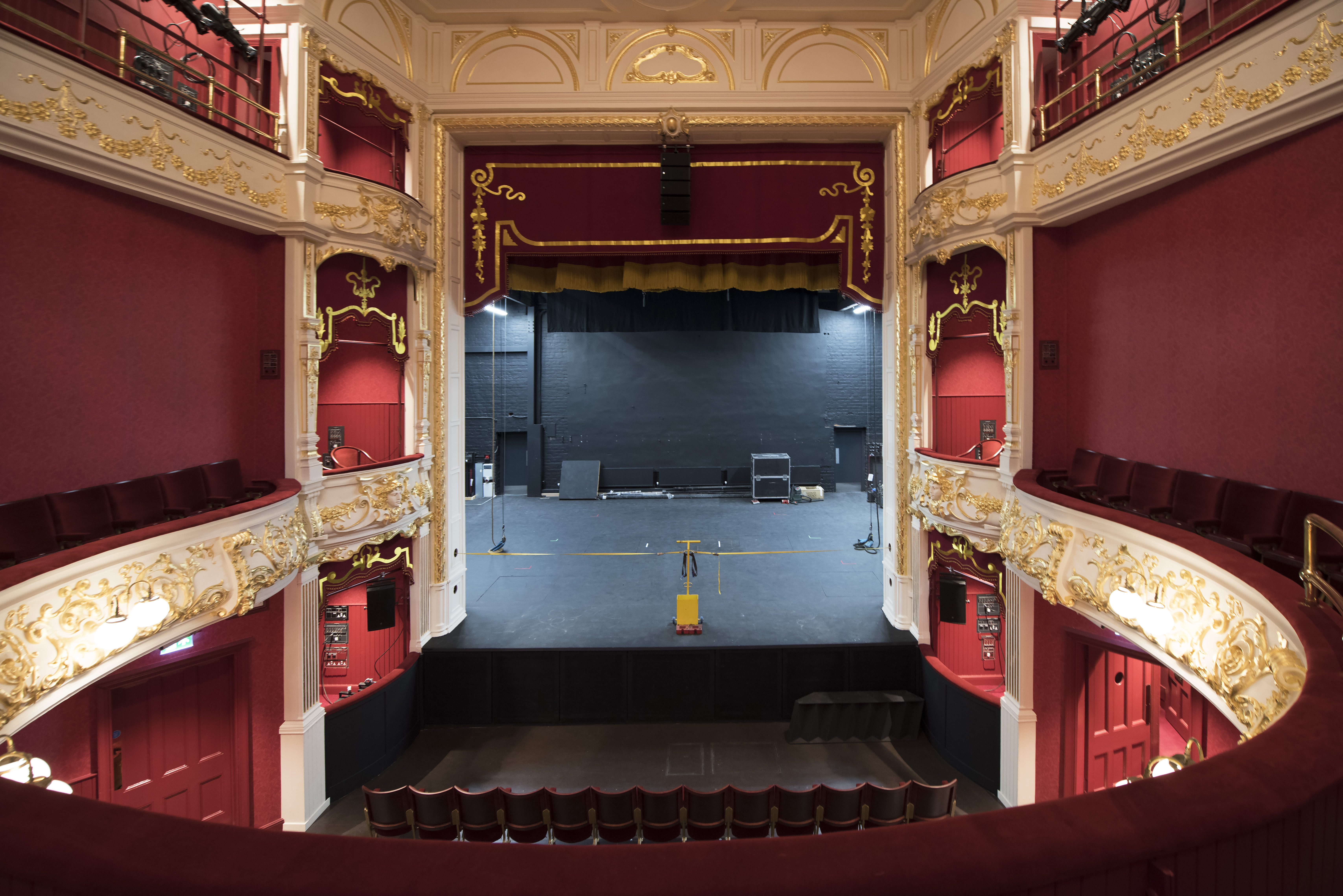 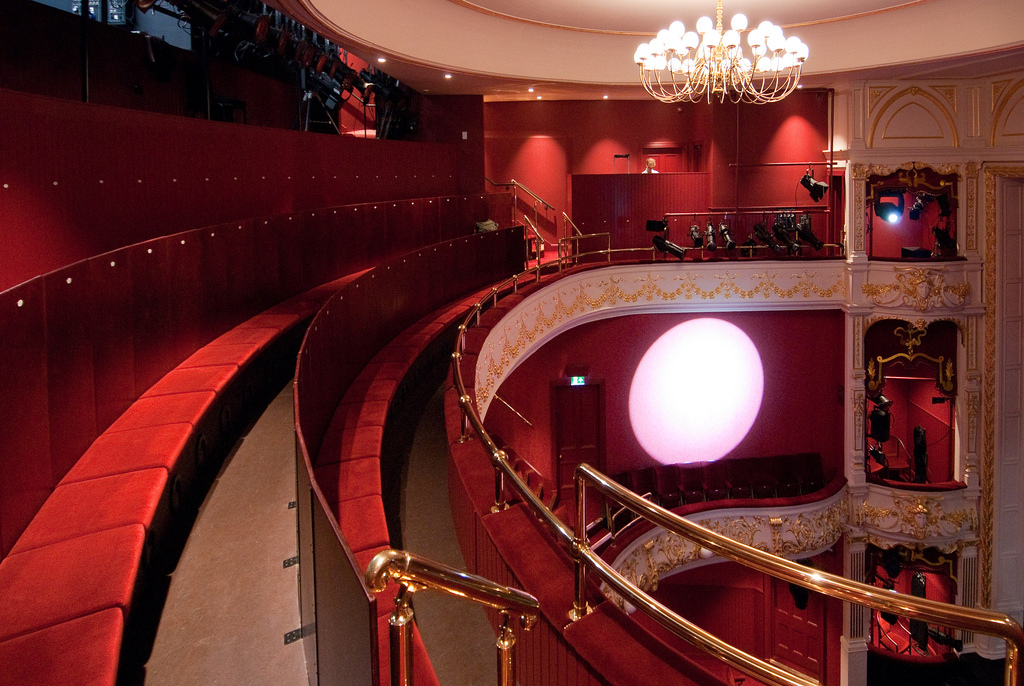 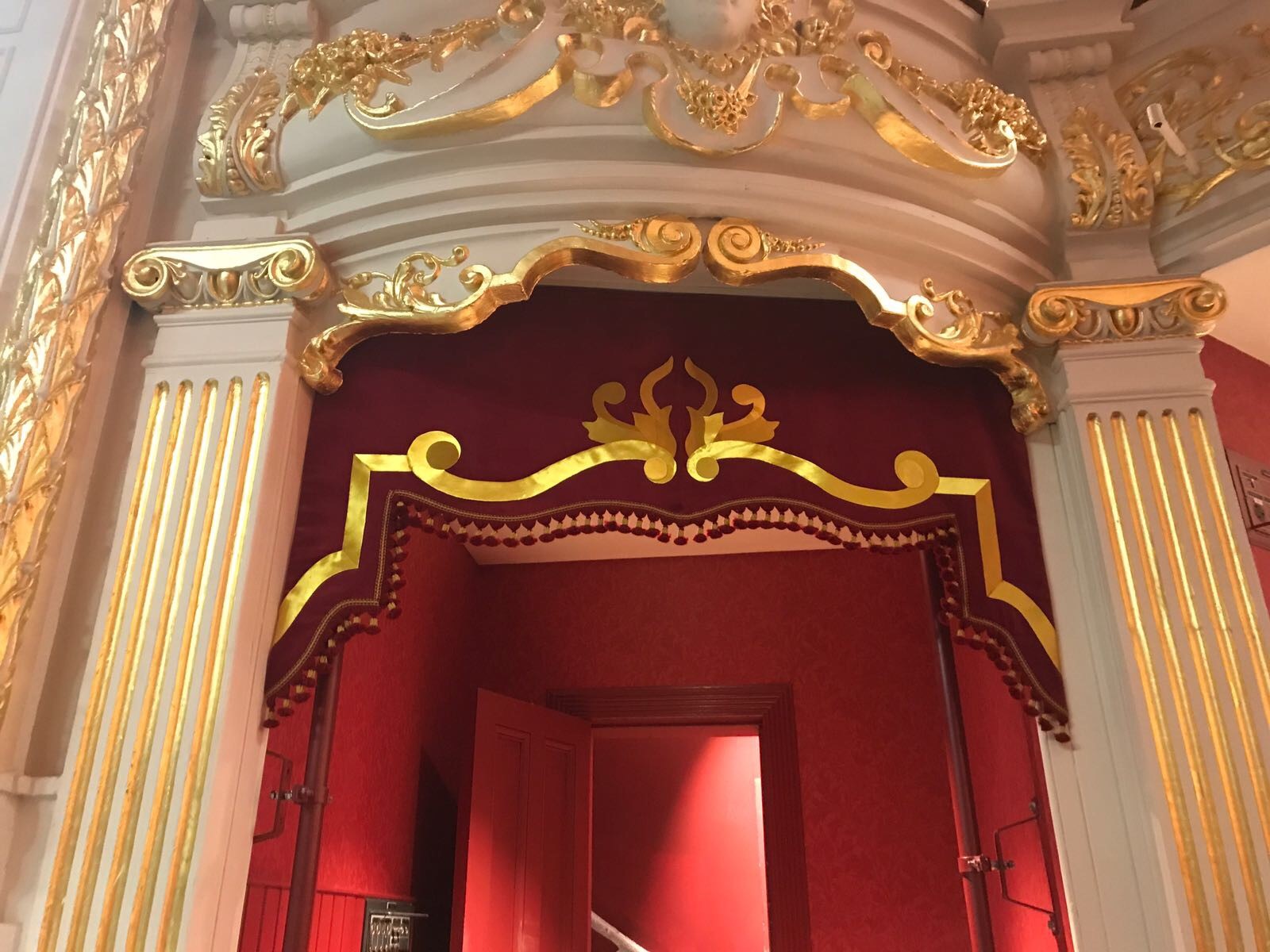 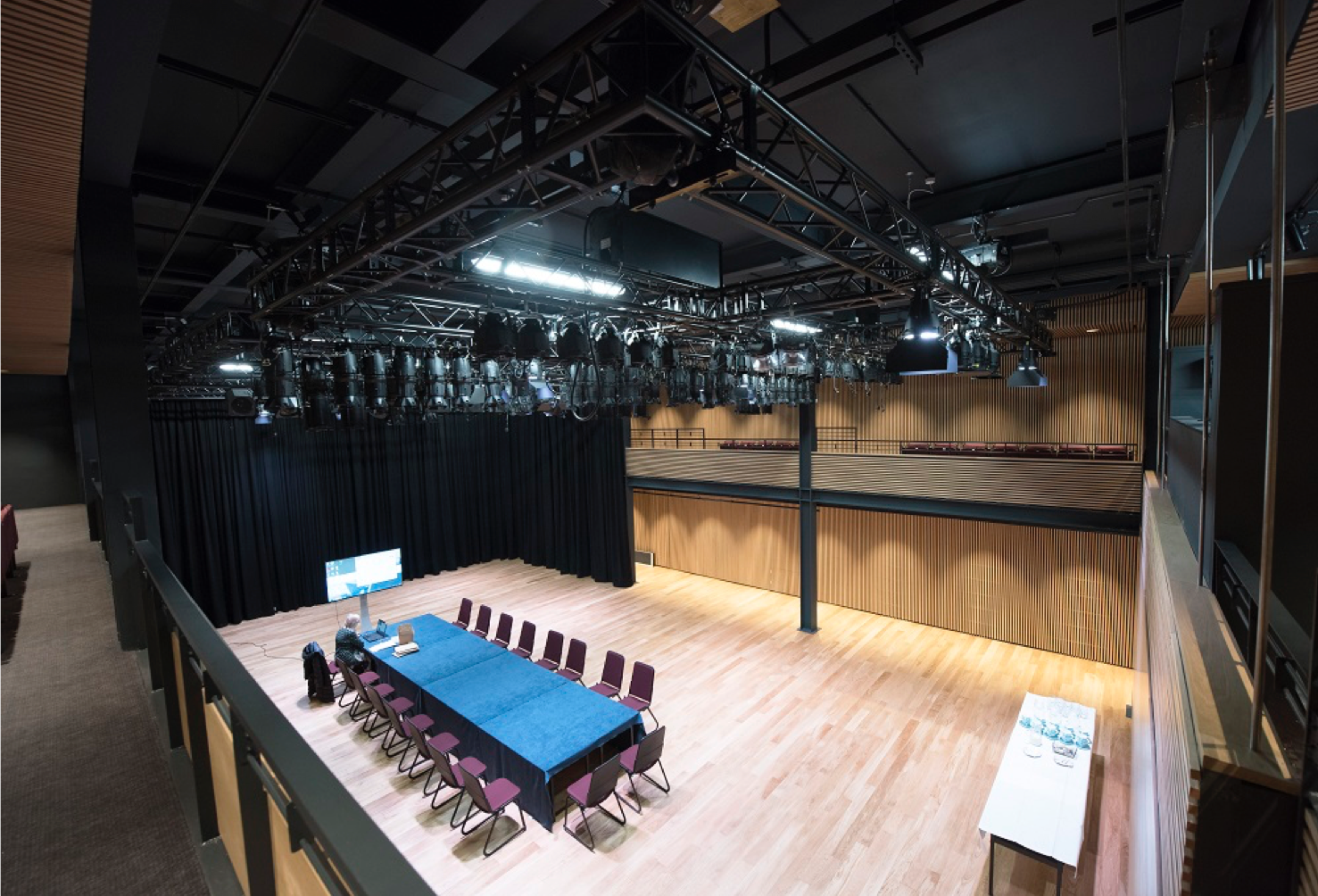 When Perth Theatre underwent a huge restoration, they called upon J&C Joel to provide a full drapery package and carry out a complete overhaul of their stage engineering facilities.

Perth Theatre is one of Scotland’s oldest and best-loved repertory theatres. The current Grade B listed building was constructed in 1900 and is run as a producing theatre by Horsecross, who wanted to restore the theatre to its former glory.

Before starting the drapery element for the auditorium, J&C Joel invited Gavin Johnston, Head of Productions at the theatre, to discuss every aspect of the drapery requirements. This resulted in the correct shade of J&C Joel’s gold Regal Satin to be carefully chosen, to best complement the new gold leaf paint on the drape’s design.

The Front of House curtains, each of which measured 5.300m wide x 6.960m drop, were also manufactured from wine Empress (VEL175) with 50% fullness and were finished with citrine Regal Satin banding which was set up from the 40mm handwoven custom dyed wool braid and 460mm deep bullion. The bottom 460mm of the drapes were manufactured from gold Coloured Wool Serge (WS010) to help emphasize the gold bullion sitting in front of the fabric.

J&C Joel then manufactured and installed intricately shaped pelmets for the six boxes, all of which had applique replicating that of the original and finished with the same bobble fringe as the Front of House Pelmet’s, to ensure consistency of look and colour across all drapes.

For the stage engineering side of the project, in the main auditorium, J&C Joel undertook a major refurbishment of the 38 single purchase counterweight sets, including new fly bars and hauling lines.

J&C Joel also installed four pilewind winches, these included an upstage flying bar with a safe working load (SWL) of 250kg and a house pelmet bar with a SWL of 150kg. For the feature chandelier above the auditorium, a 150kg pilewind winch with non-rotational steel wire rope was installed, along with a cable management realer.

In the goods loading bay, J&C Joel installed a Serapid Chain Lift and a bespoke lift platform which provided the theatre with a much-needed goods lift to manoeuvre equipment and grand pianos. The lift had a speed of 150mm/s and a static and dynamic load of 280kg/m2.

Furthermore, in Perth Theatre’s Studio Space, J&C Joel installed three bespoke dimensioned truss grids, all formed from Litec QX30A quad truss. Each truss had six EXE Rise chain hoists with a SWL of 300kg and a 50kg/m payload with a maximum 1500kg UDL. A standard control system was provided to allow any truss enabling them to move independently from each other.

J&C Joel also manufactured perimeter drapery for the Studio space from their black Wool Serge 565 (WS090) and installed on E-rail track, this type of track was ideal as it allowed the drapes to be smoothly pulled open and closed by hand.

Finally, in the theatre’s Community Room, J&C Joel installed two bespoke lighting grids which were fixed into the fabric of the building, allowing the client to configure lights as required.

Perimeter drapery was then manufactured and installed in this space. These drapes were manufactured using black Wool Serge 565 and hung on two U-shaped E-rail track systems, to work in the same way as the Studio’s track and drapes.

Oliver Marns, Creative Sales Manager at J&C Joel said: “The end result was a stunning set of drapes which really work with the décor and colour scheme of the main auditorium. The intricacy of the applique really stands out and it is a testament to the skill of the J&C Joel creative team that this was all manufactured by hand.”

Fraser Davidson, J&C Joel’s Head of UK Projects, added: “This project was a fantastic opportunity to add some modern stage engineering to a wonderful old theatre, without reducing the operational needs of the client. The original stage engineering equipment was refurbished and new stage equipment was added to the theatre and its new studio and public spaces, giving the Perth Theatre a fresh venue to put on first-class shows.”