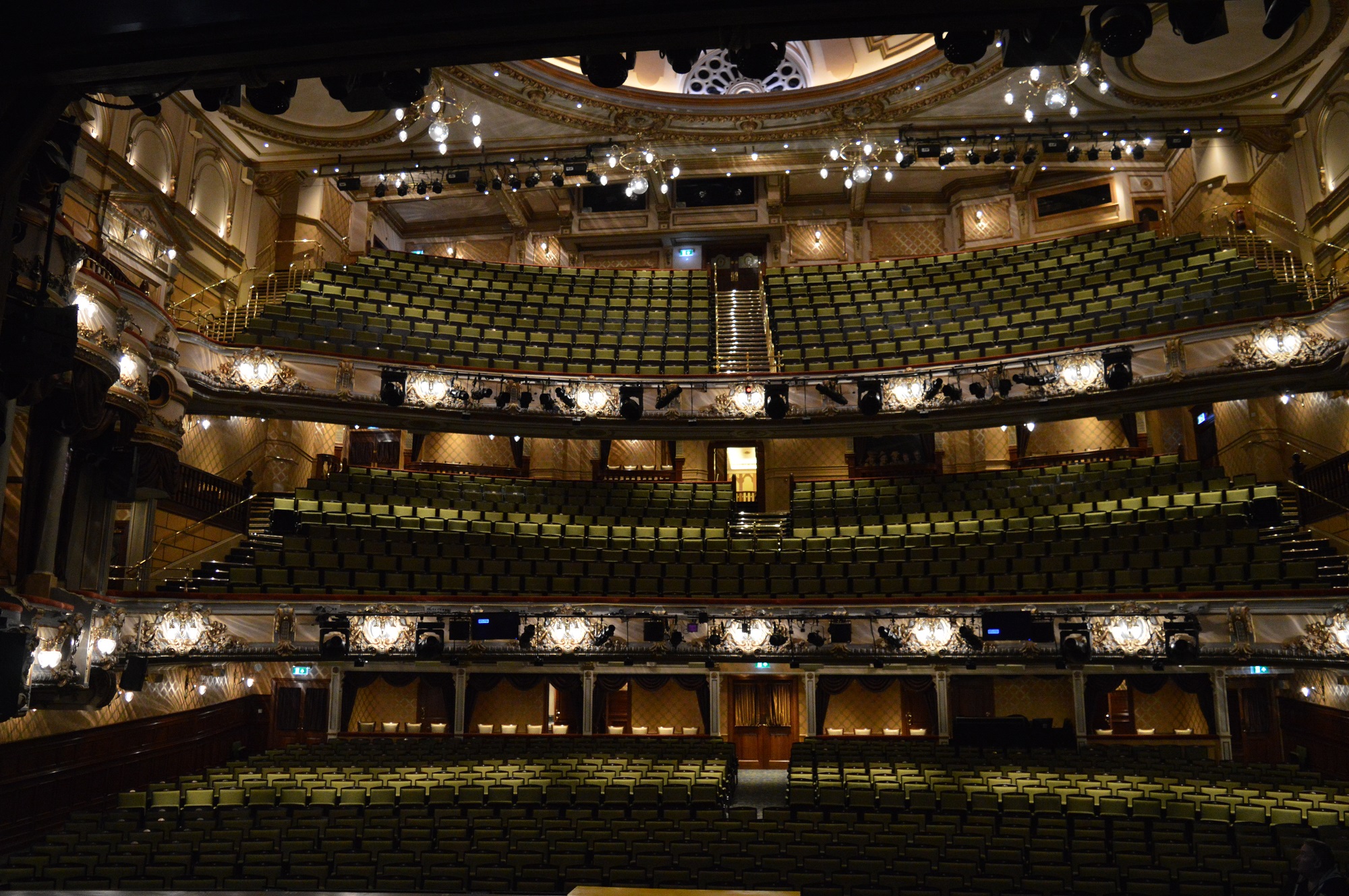 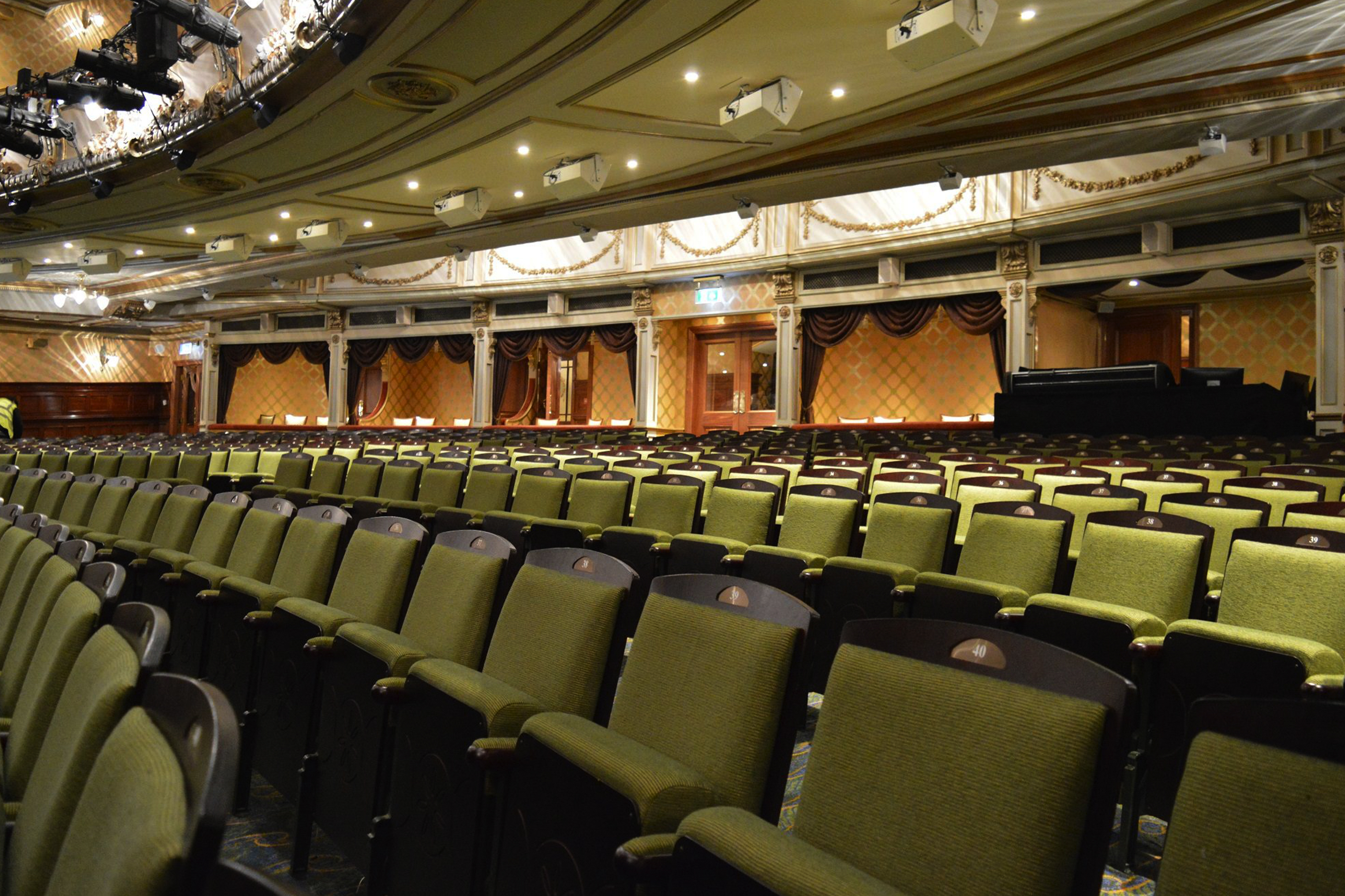 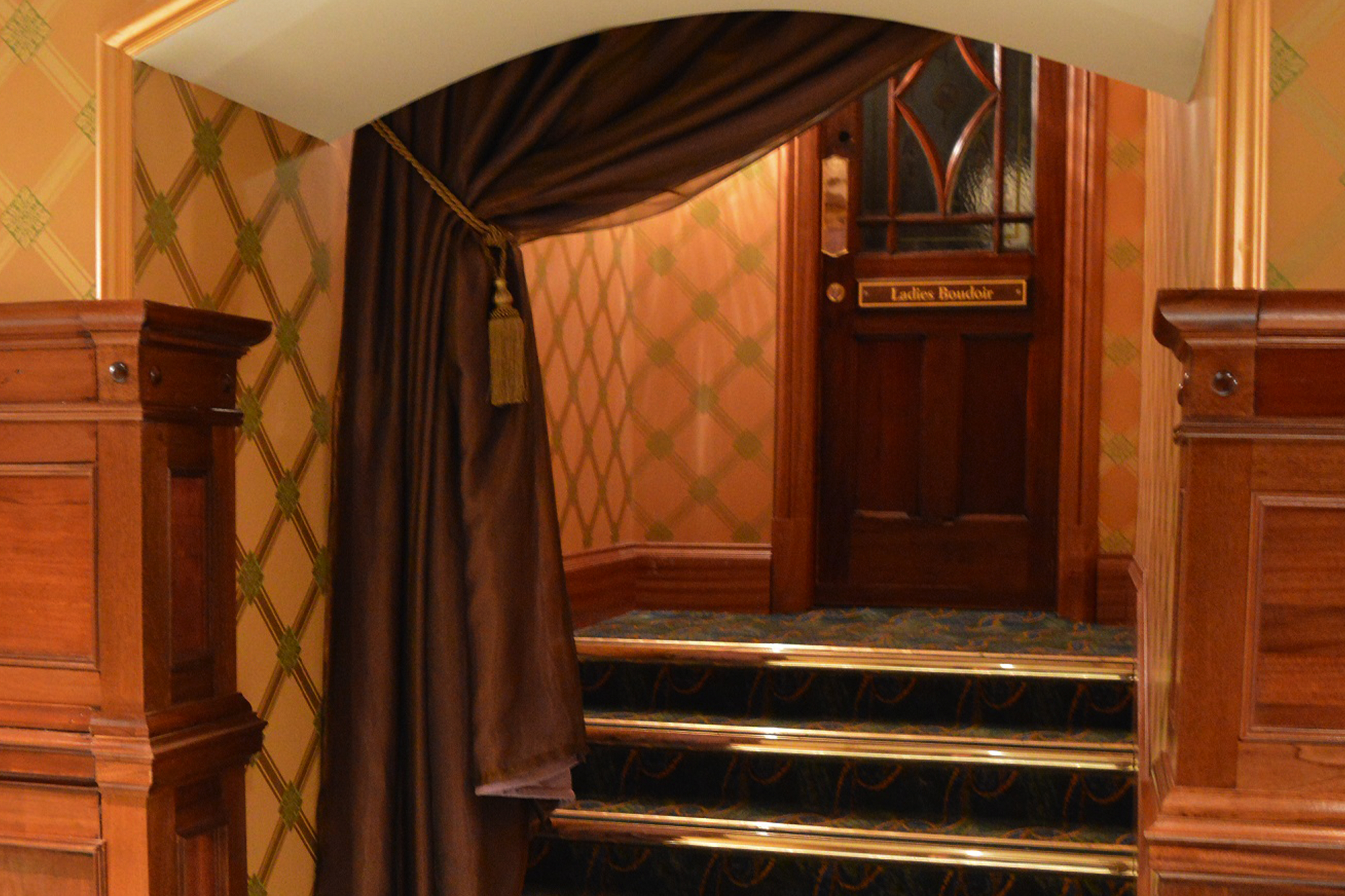 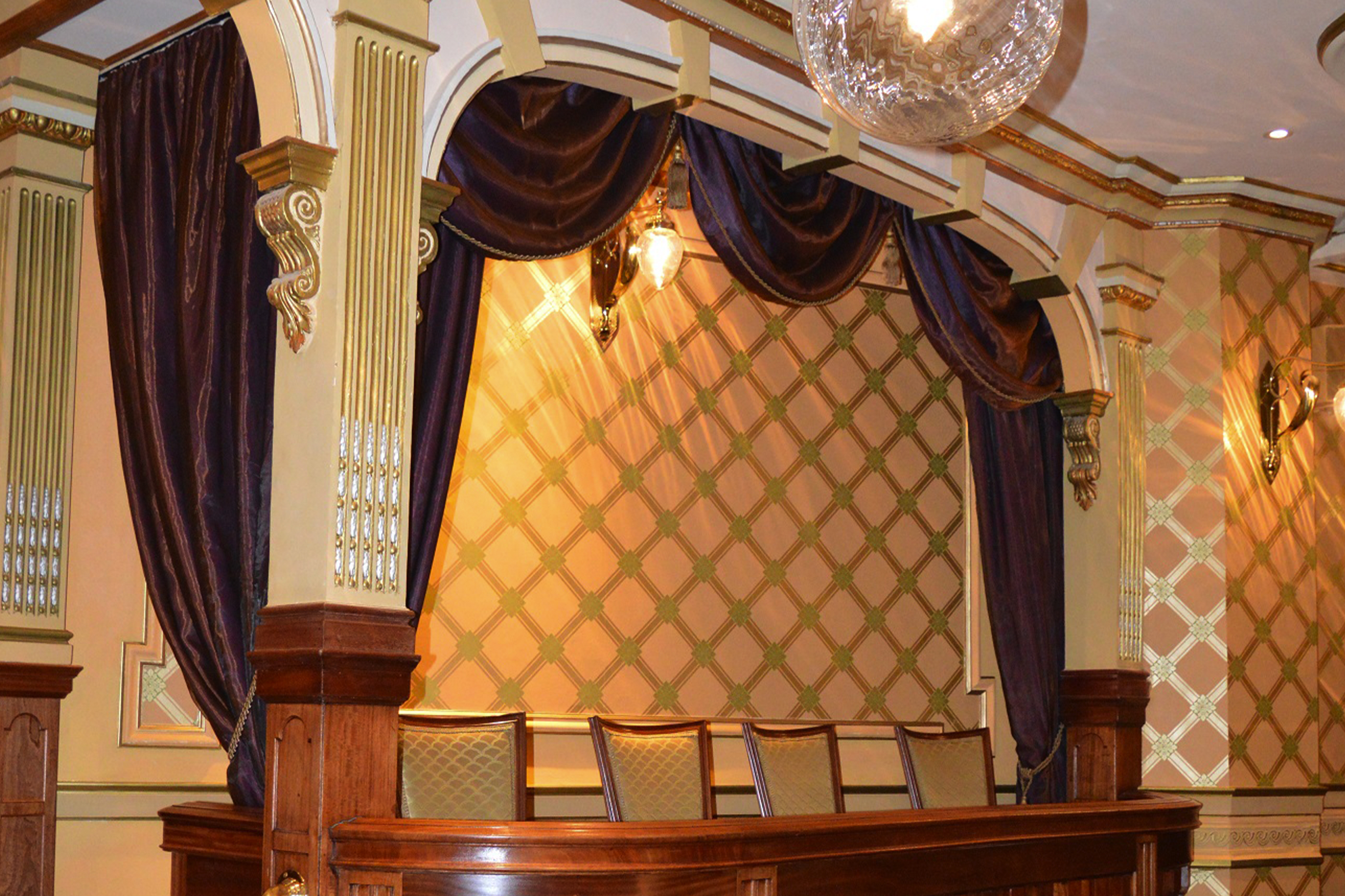 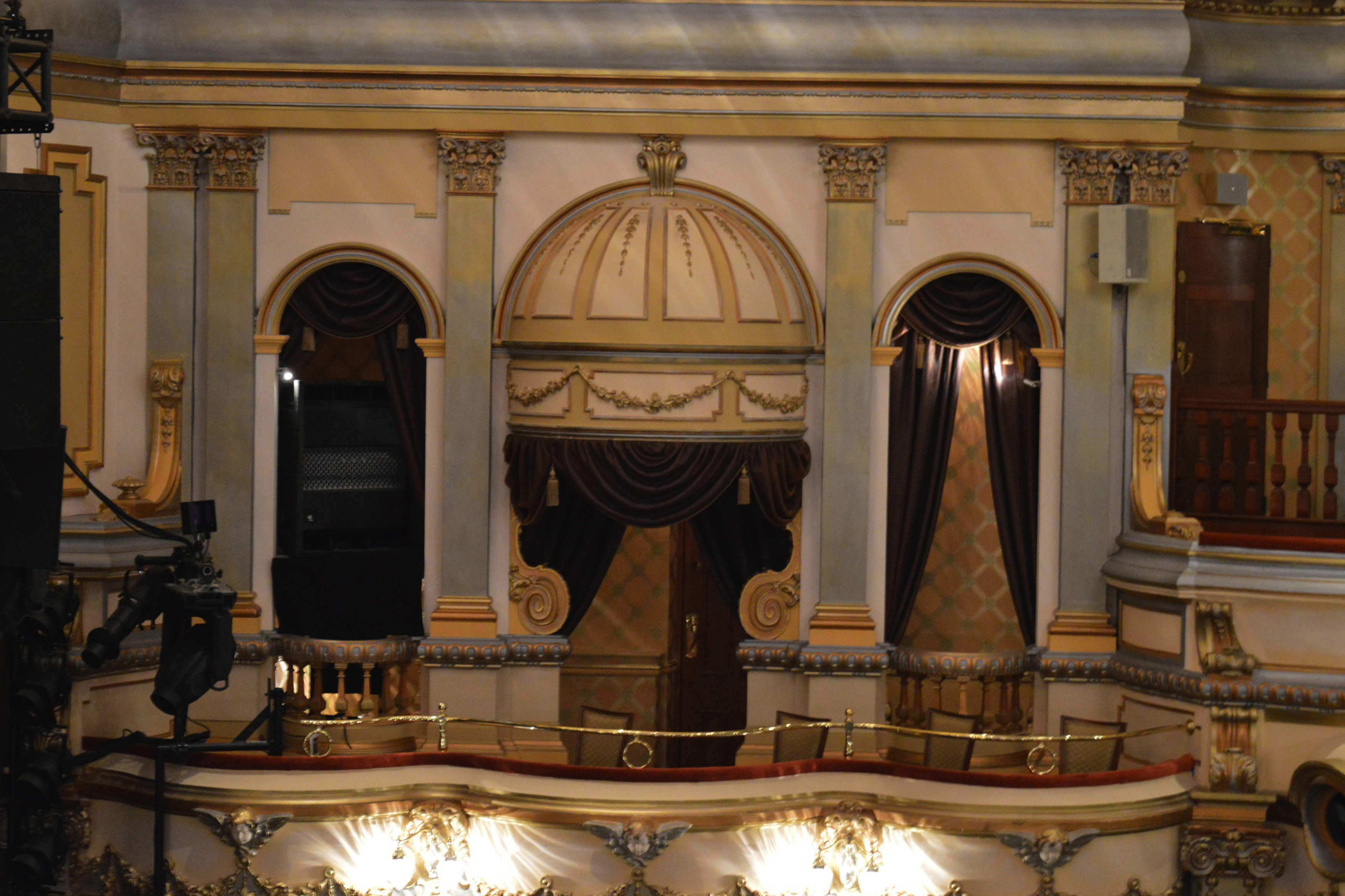 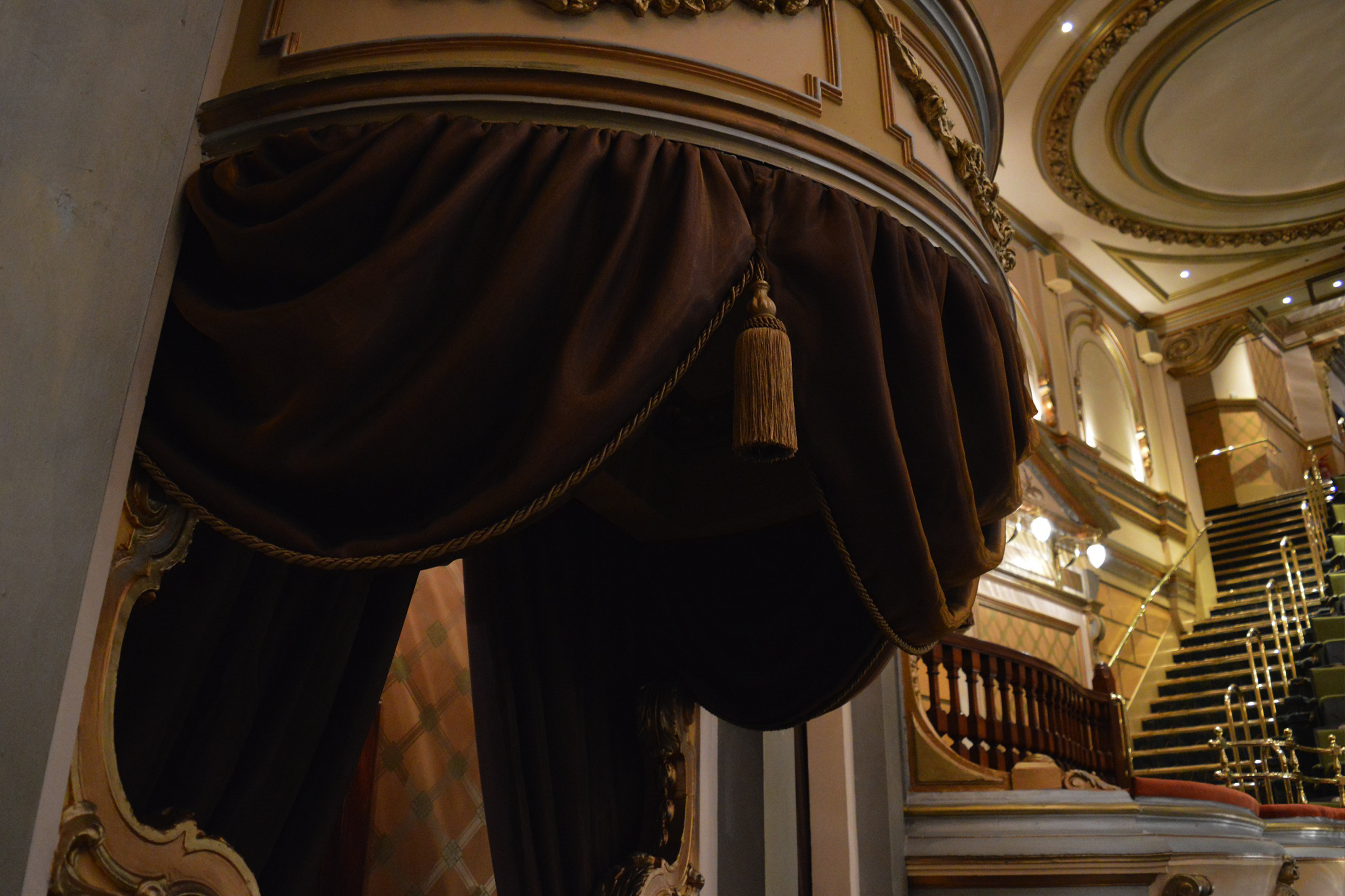 J&C Joel designed, manufactured and installed a series of ornate and decorative swags and curtains together with custom trimmings throughout the Victoria Palace Theatre.

The theatre was purchased and refurbished by Sir Cameron Mackintosh specifically to house record breaking American musical Hamilton. The £50m refurb restored the venue beyond its former glory making it one of the jewels in the crown of the West End. It is arguably the most prestigious renovation in years and is a positive signal for the industry that musical theatre is alive and kicking.

The brief was to ensure the drapery met the requirements of leading theatre interior designer Clare Ferraby and Sir Cameron Mackintosh, owner of and driving force behind the renovation.

In total there were 61 different areas within the auditorium that required drapery which was made up of 66 swags, 66 curtains and 6 door window curtains. The drapes were all made from at least three layers of fabric, designed to give the drape real depth, including Copper Brilliant Organza, Damson Brilliant Organza  and custom dyed Rishworth Velvet (VEL450).

All swags were finished with custom designed and dyed gold rope with different diameters for different areas, tie backs which had custom moulds painted to a specific RAL colour with custom-made tassels in the same shade of gold.

Certain curtains were also hung on bespoke burnished brass poles with intricate finials, all of which went through a rigorous approval process.

The main challenge for the project overall was the requirement to design, draw and receive approval on a huge amount of drapery before the building was even complete. The majority of the areas J&C Joel were manufacturing drapes for were not built or finished until after we had commenced manufacture.

The knock-on effect was that J&C Joel’s team had a short window in which to measure, redesign, redraw, receive approval and manufacture the drapes. There was a great deal of detailed calculations made to ensure there was sufficient fabric to produce the drapes.  This was made even more of a challenge as we have to begin production of the fabric months before the building was complete. J&C Joel overcame these issues by utilising their highly skilled creative manufacturing team who worked tirelessly to ensure all drapes were completed on time and then packed into custom boxes to preserve the drapes whilst being transported to site. Due to there being so little time between completion of installation and the opening night, the drapes had to arrive in pristine condition.

The installation, which was completed over three visits, was made more complicated due to the lack of time available and the sheer volume of work being carried out by other trades.  The first two visits were to install the many batten fixes, including custom boxes that allowed the swags and legs to be fixed at the same level but behind one and another whilst at the same time hiding the batten completely.

The third and final visit was to install and, crucially, dress all of the drapery. The final installation took place over two weeks working through the night due to the technical rehearsals of Hamilton taking place during the day.

The installation was challenging with a four-person crew working relentlessly to ensure the venue was looking immaculate in time for the opening night.

As a finishing touch, J&C Joel also supplied over 100m of hand woven barrier rope in the same shade of gold as was used throughout the auditorium.

Oliver Marns, J&C Joel’s Creative Sales Manager, said: “It was a genuine honour and privilege to be involved in such a special and high-profile project. To see the transformation of the building over the course of our 12-month involvement was nothing short of miraculous. The attention to detail was from everyone involved was exceptional. The drapes were no different. Every element was subject to involved design, approval and sampling. The result is a job that we are all extremely proud of.”